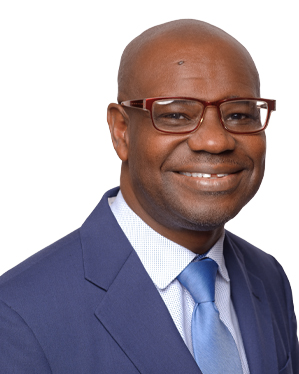 He is the Director General of the OUR, and an ex officio member of the Office, having been appointed by the Governor General, His Excellency the Most Honourable Sir Patrick Allen, from 2017 January 1.

He is a Regulatory Specialist, Economist, and Attorney-at-Law and has over 25 years’ experience at various levels in quasi-judicial organisations. His educational background covers law, management, and economics with extensive specialised training in, among other areas, regulation, competition analysis, strategic planning, leadership, international negotiation, and corporate planning.

He joined the OUR in 2000 February and before that worked at the Jamaica Bauxite Institute and the Fair Trading Commission as an Economist. He also lectured at the postgraduate level on Regulation and Regulatory Reform in the Department of Government, University of the West Indies (UWI), Mona for over 10 years, and served as a tutor in the UWI Master in Telecommunications Regulation and Policy Programme. He has a master’s degree in Regulation from the London School of Economics, obtained after being awarded a Chevening Scholarship in 1997, a Bachelor of Science (B.Sc.) in Economics and Management (UWI), and
Bachelor of Law from the University of London. He also holds a Certificate in Legal Education from the Norman Manley Law School.